If yer in the mood for a Sunday drive… 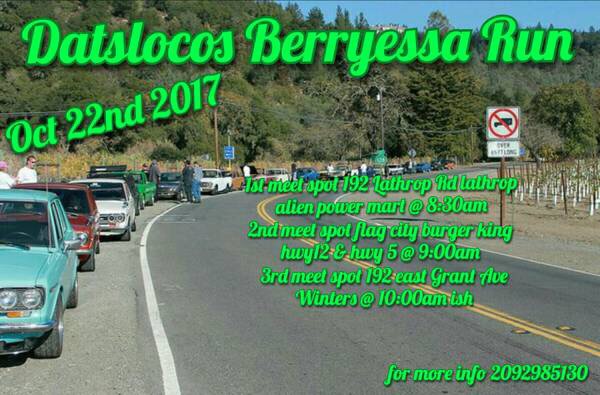 Here’s an interesting story: I spotted a 240z while flagging down a Corvair 95!

This guy was hummin’ along well over the speed limit in his blue Corvair 95 van, wheels tipped in – really punchin’ it!

Lol looking at the picture again – man, this says so much. You can see my speedometer..i’m going 40 and barely keeping up!

So I sought to flag him down to chat Corvair, and ended up at his driveway. Lo’n-behold, his neighbor owns a yellow Datsun 240z w/ some very interesting modifications i’ve never seen before! Check it:

You really get a Knight2000 vibe to it, yeah? You know when KITT goes into Super Pursuit mode? :]

First off, he’s got the Xenon body trim all the way around – left the rear black. Blacked out gas door and turbine styled wheels. Can’t really see it but also a stacked muffler like a Master Blaster. But what are those 2 items?! Is that a hatch spoiler? Are those white hatch vent covers?

Let’s work our way up: white hatch vent covers. I’ve never seen these! Usually, they’re slotted and chrome hatch vents, minimally raised from the hatch. These are clearly well pronounced comb-like covers made to force air down and out. Of course the ‘net doesn’t give much on these obscure guys!

Now check out that hatch spoiler! Again the internet lets us down! Though dark, it didn’t seem like it was home fabricated, so there’s got to be something out there on this! Anyone?

Now I KNOW we’re living in the right neighborhood! Just a street down from my house I spot… 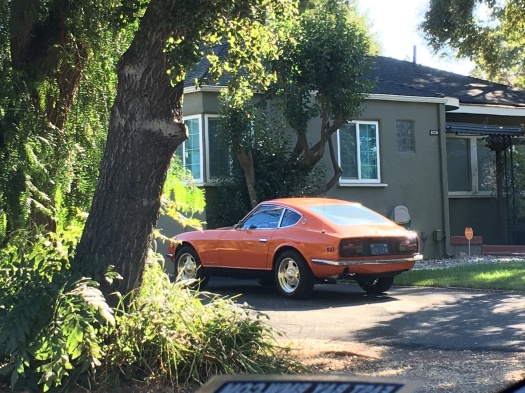 What an example of a classic Datsun 240z! One of these days, I’ll head over there and we’ll get a chance to know more about this guy!

From the Bay Area Datsun Z Facebook community, I met Hector, owner of a 1972 240z! What a great guy, and he really needed Z flares. I just happen to have them! Actually, I had them for quite awhile, initially thinking they’d be on the 280z, but my dad convinced me otherwise (which was a good decision for the style of my car). Regardless, they’ve gone to a good home!

Hector’s 240z is powered by a L28et (turbo’d) riding on BC coilovers. Just check out that whale tail!

My 280z may not have the killer stance / looks of the ZG flares, but the NEXT Z will DEFINITELY have them on! 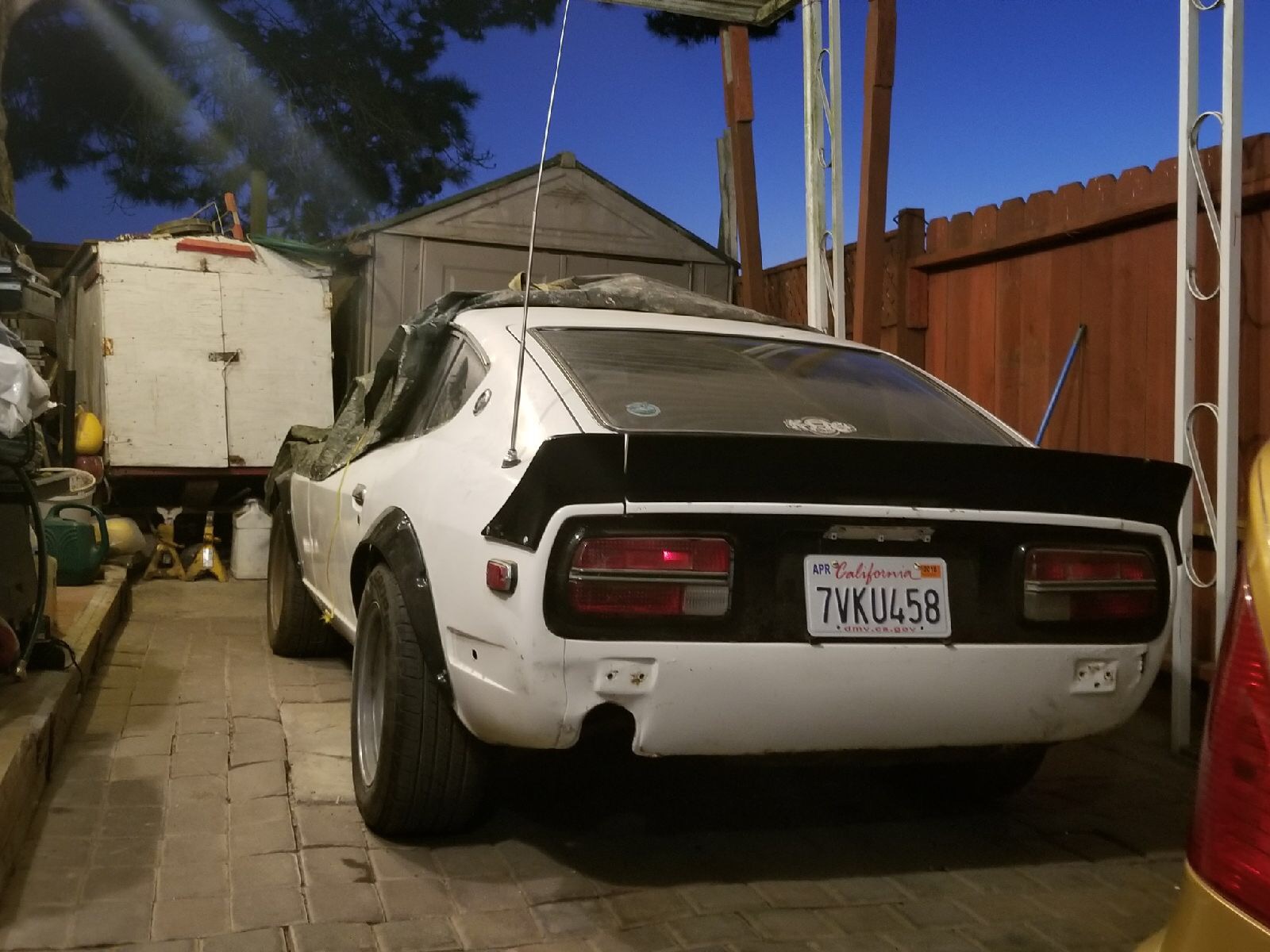 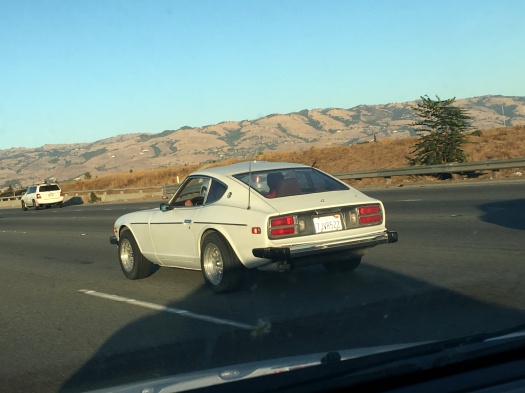 You should’ve seen these two guys – absolutely having a blast! Just another classic Z on the road as it should be!

As you’ve guessed from the title, we’re replacing fuel injectors!

After purchasing a classic Z, or any old car for that matter, there’s always a list of things to inspect, test, and replace. After what’s now coming up on…3 years (oh my!), I’m finally diving into the engine – specifically, its ignition and fuel injection.

The injectors in this Z have always been unknown to me..well frankly because I didn’t take the time to inspect or get to understand them. They clearly look like they were replaced by the previous owner (Wild Bill’s brother), they worked, it ran, and that’s all I needed to know.

But whenever I looked at those electric signal connectors fastened by a wad of silicon glue, it always made me wonder what the heck was going on. Until now I’ve been in the ‘if it ain’t broke don’t fix it’ camp, but one day, I had the gumption to poke at it while the engine was running… Immediatly, the engine started choking, gasping for fuel. You know, it’s about time we give it love and clean these up!

Let’s get our hands dirty!

Here’s what comes with the FJ707 fuel injector for the 280z:

Tip: Before diving into any project, it’s good to understand what’s the current state, or steady state – basically, what the heck is going on. I listened to how things ran, did a quick inspection of bolts, and made a mental note of where everything was (of course I made a digital “note” with camera too!). Are bolts rusted? What other parts are in and around the area that may need replacing? It really helps to visualize what you’ll be doing BEFORE you go and do it.

Prepare to use a long Philips screwdriver to take out the screws holding in the fuel injectors. Or I suppose a right angled driver could work too. A long Philips will help get passed all the fuel rail business.

I didn’t have the right angled Philips but this extension I had lying around did just the trick. 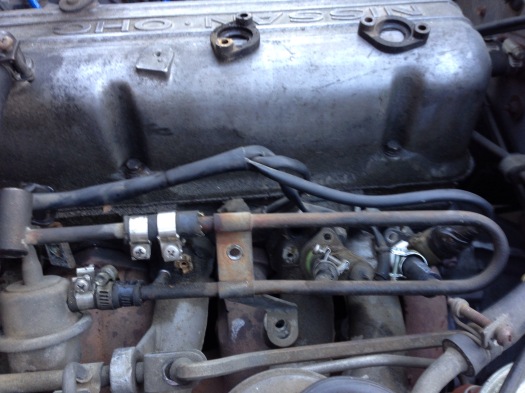 Start by removing the screws that hold down the portion of the fuel rail above the injectors you’d like to replace.

Loosen up the hose clamps that connects the injector hose to the fuel rail. Getting the old injector hose off can be tricky. Just use a razor to cut a slit length wise where the hose meets the fuel rail. CAREFUL! Gas is going to leak out, so get that rag ready and handle it properly. You’ll notice that the fuel rail is separated into several sections. This is perfect because you won’t have to remove the whole thing to change the injectors out. I loosened one end of that sectional hose in the rail just to relieve stress and give the rail some flexibility. Now you can change 3 injectors at a time.

I started with the set of three closest to the cabin. Of those three, it’s easiest to start disassembling from the cabin forward, and then when re-assembling, start with the one farthest from the cabin. It easier this way because the motion of the fuel rail as you’re working on each injector can pop off the assembly of the previous one…you’ll see.

Here you’ll see the old injector on the left and new one installed on the right. When disassembling be sure to remember the sequence of parts and process. 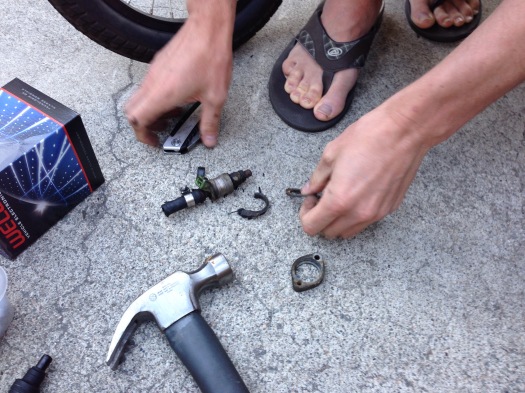 Here’s the old injector with flange, gasket, and seal (cut). The rubber seal maybe all worn out and stuck to the flange or injector. Just cut that sucker off. I also used a hammer to get the flange off of one of them. Light taps!

Use the wirebrush to cleanup the parts.

Ugh stripped head. That’s what you get with a 38 year old bolt – rust and dust! I use the Speed Out easy out (Amazon) for all stripped heads – they’re amazing.

Replaced it with a stainless M5-.8 bolt, 30mm long from Home Depot or Amazon. You’ll notice the head a touch larger, bolt a bit longer, but it works just fine. Make sure to pick up new lock washers while yer at it.

Reassemble everything and that’s it! I think you’ll know if the injector isn’t working properly – the Datsun’s engine is pretty transparent, you’ll notice the misfire.

Next up: Shocks? Bushings? Hey, how come in one picture I see some blue wire in the background?! 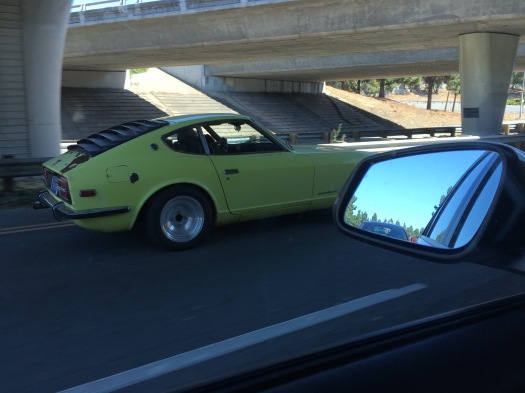 Mirrorless and on Centerlines. 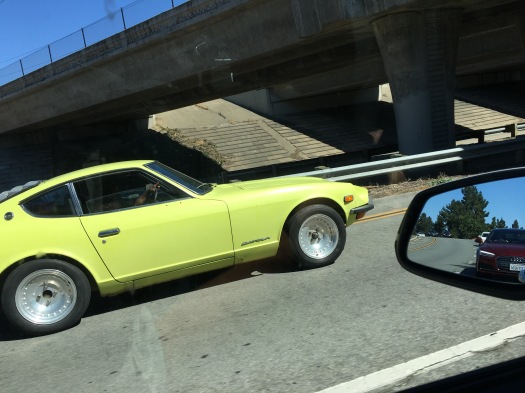 Want your own “barn find”? Let your car sit untouched for a year! But like Patrick Swayze said, “nobody puts baby in the corner…nobody”.

Yes, raising kids and renovating our house certainly put the “daily” into “yearly” datsun. There’s no hooks for a car seat.. and no sense in putting precious cargo in danger too 🙂
So sat the Z: gathering serious dust, air escaping sagging tires, gas turning to varnish, crankcase oil crusting over…

Then my parents came out to visit, helped clean out the carport, and we decided to turn it over:

And roared back to life on the 2nd crank!

So a few general tips if your car is going to sit for a while:

1) Start it up once in a while! We all know this, but you know how it goes. Starting and letting it run will keep the engine free and battery charged.

2) Move it around! Keep the joints moving by either driving it around or just go back and forth a few feet. Either my differential or brakes froze because in order to move it, I had to give it some heavy gas and something broke free!

3) Keep it covered! I thought by seeing the Datsun uncovered it’d prompt me to do something – lolz. If you really want to do something, you’ll do it. And covering it will only protect it from the elements, accumulating grime, and minor mysterious scuffs and dents (where the hell did that come from?!) I’ll pop that out later… 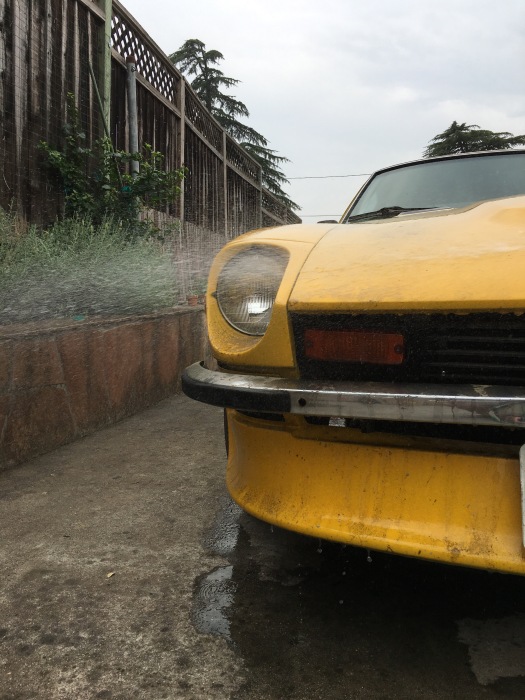 Anyways, he sure cleans up handsome.

Next up: Midnight Maintence! Clutch takes 4 pumps too many! OMGs – SMOG!

When we were kids, we had the pleasure of playing with my dad’s slot cars. When he was young, they raced both large and small versions. I remember my dad telling us stories about racing those cars and about a red metal suitcase that stored them.
Since we had plenty of small track around, we’d lay out, and race those little cars around and around – getting really good at knowing when to temper that trigger around a corner and just letting it rip across the straightaway!

Of course, my brother and I would always choose our favorites. Mine was always this orange one…and if you asked me yesterday, I’d recall it as perhaps a Porsche 944 of sorts.

Well in the midst of my brother cleaning out the basement, tossing toys of yore, he found dad’s slot cars, and that orange one I favored so much… 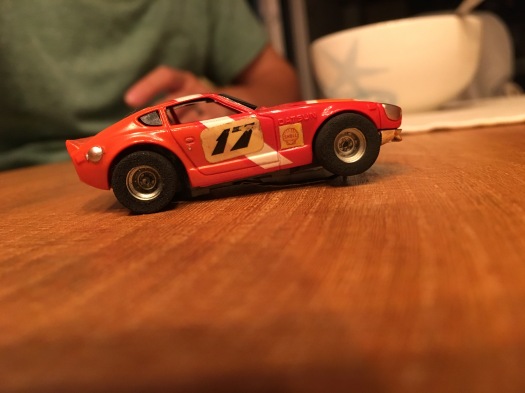 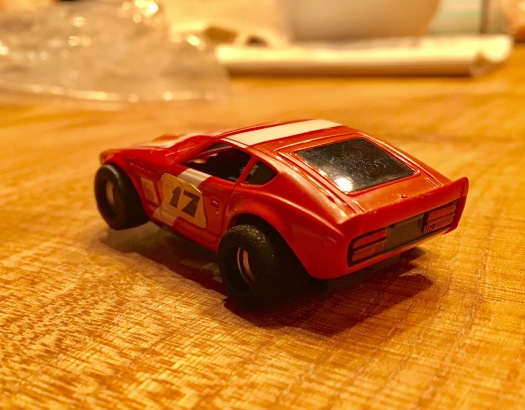 I guess it was such an awesome car back then, it just captured me and it’s stuck all these years. Thankfully, my brother kept the car, and dad gave it to me.  I’m just thankful my dad was able to expose us to all these cool things like slot cars. Mmm I wonder if my son Emerson would like to play slot cars someday…

Thanks to a comment from DJBlackrabbit, I found out my domain..THIS domain, DailyDatsun.com fell off the face of the earth. Though not set to auto-renew, it didn’t hit the internet trash bin (that would’ve been too easy) – no, DailyDatsun.com is popular enough that it got picked up by some Chinese / HK domain resale company. yep. I HAD TO BUY BACK MY OWN DOMAIN. wtf.

Well. We did it. Let’s just say I didn’t lose any arms and legs…but it certainly put a new perspective on what’s going on here. We’ve really started something. Well, enough to get noticed, and put some real value on it. And now that we’re back up and running, it’s time to shift gears. We’ve burned out 1st long enough!

Welcome to a new Daily Datsun.

Summer is coming, and it’s time to take the car cover off.
Let’s see where the road takes us, and continue to enjoy the journey.